skip to main | skip to sidebar

Deanna was searching for some vegan Indian food in Orange County and found an OC Weekly article claiming that Clay Oven was the best Indian food in OC. So she called the place and asked, "Do you have vegetarian dishes?" and the man on the phone answered back, "Yes, many vegan dishes too!" And that was all we needed to hear. When a place understands the word 'vegan' you are off to a good start. (As a side note, we heard good things about Chakra (another Indian place in Irvine) and tried it out. We went at dinner time, and NOBODY was in there. Bad sign. And then we asked our waitress what things were vegan and she looked at us with a blank stare like we were speaking Russian. She had to go back and ask the chef. And when she came back, we were informed that not much could be modified to be vegan. (At and Indian place!) All that did was reveal that the food is not fresh, and the chef is an amateur. Or probably it was just cooks back there, heating up pre-prepared food. Alas, the food was not so good.) 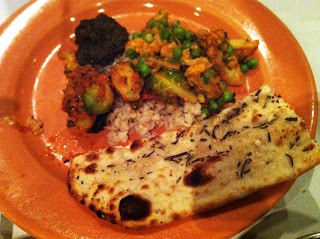 Let me start by saying this IS NOT a vegan restaurant, they serve meat, but they have plenty of vegan options. This place makes everything fresh. And changes the menu seasonally. We asked them why they didn't have Aloo Gobi, and his answer was basically that it would be too typical to have that on the menu. (But he would make it for us if we wanted!) They prefer to do things differently. When we asked about the Naan bread, it was vegan too, and he was super flexible when we expressed that the rosemary naan AND the garlic basil naan sounded good, he just said, "We will make you rosemary garlic naan, no problem!" (A great sign that the food is freshly prepared.) (I didn't have my regular digi-cam, so had to use crappy iPhone - sorry for image quality.) 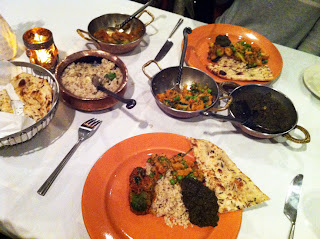 We had one of the best dishes we have ever had at an Indian place, and one that you will never see at another Indian restuarant, Brussel Sprouts! (Choti Goghi $14.95 (ouch!) Brussels sprouts in a tomato masala) Well worth the price! 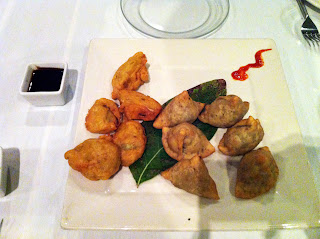 We started with artichoke pakoras (not typical!) and samosas (vegan on request)

This place was very good. A bit pricey (we did order a lot of stuff), but it's Irvine, and the food and service was impeccable. So you get what you pay for in this case. We didn't feel ripped off. And we will be going back for sure, and ordering less food! I think everything on the menu under the "vegetables" heading was already vegan or could be made vegan. And they had a cauliflower soup on the menu that we didn't get to try that sounded really good. A reason to go back before the season changes.
Posted by Ed Templeton at 2:12 PM

People who scope us:

Ed Templeton
We are vegans who travel.